How our team works 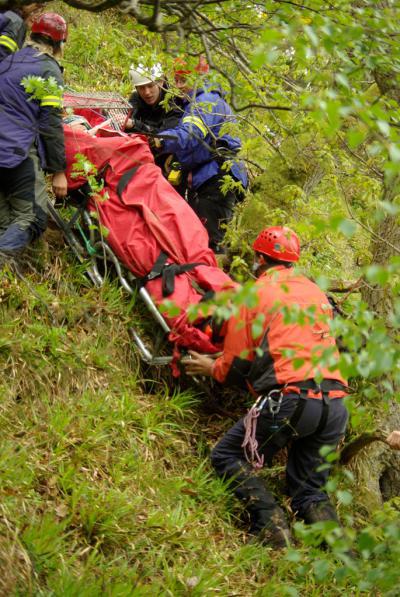 Border Search and Rescue Unit provide mountain rescue cover in the south east of Scotland. All members of the team are volunteers who live and work in the local community. We are on call to provide emergency assistance 24/7/365. Border SAR is affiliated to Scottish Mountain Rescue.

In 2004, the importance of civilian Mountain Rescue Teams were recognised when we were awarded some government funding for the first time. However, we still rely heavily on donations to provide a professional service, free of charge to those in need. The team holds an annual sponsored walk on the first Sunday in October, and for the past couple of years, we have been bag-packing in Sainsbury's Kelso during the Christmas period.

One of our busiest times each year is undoubtedly during the local common riding season, when the team provides emergency medical cover for Duns, Kelso, Yetholm, Coldstream and Jedburgh rideouts, as well as smaller events. We are always grateful to these events for the donations they make in return for this service.

Border SAR can be called out for a wide range of operations: a missing or crashed aircraft; overdue hill walkers; injured climbers; missing persons; fishermen washed away and even suicide recoveries. A wide range of techniques can be used, ranging from carrying the casualty off the hill to calling in a specialist rescue helicopter. We are even lucky enough to be able to call in specialist volunteer divers from the Borders Water Rescue Team if required.

The team is called out via Police Scotland. They contact our team leadership who initiate Sarcall - a web based SMS system - and a pager system.  Thus, a callout can only happen in two ways: by making a 999 call or at the request of another emergency service. We work closely with the Police on all operations, as well as with other agencies and Rescue Teams

The team is based in Kelso, Scottish Borders. Our "official" Mountain Rescue Post is based at the Police Station in the town, however because of space restraints our three rescue vehicles are held in our garage on the grounds of Kelso Racecourse.